Russia is planning to supply hi-tech weaponry to the extremist regime in Iran as payment for kamikaze drones used to attack civilians in Ukraine, a minister revealed today.

It comes after the UK last week sanctioned a group of Russian and Iranian figures over their ‘sordid’ alliance and weapons deals.

Weapons supplied by Tehran have been used by the Russian military in the Ukraine war, including drone strikes on Ukrainian towns and cities and key energy infrastructure.

In a Commons statement on the war in Ukraine, Mr Wallace said: ‘We must stop their reckless shelling of nuclear facilities. We must hold their enablers to account.

‘Iran has become one of Russia top military backers. In return for having supplied more than 300 kamikaze drones, Russia now intends to provide Iran with advanced military components, undermining both Middle East and international security.

‘We must expose that deal. In fact I have just now.’

It came as Rishi Sunak this afternoon said he is growing increasingly concerned about Iran and said he believes the UK will need to spend an ‘increasing amount of time’ on Tehran. 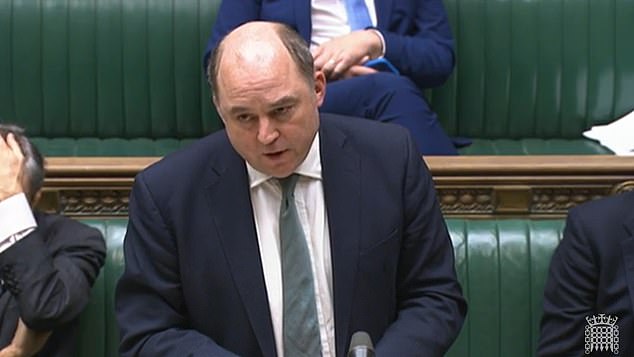 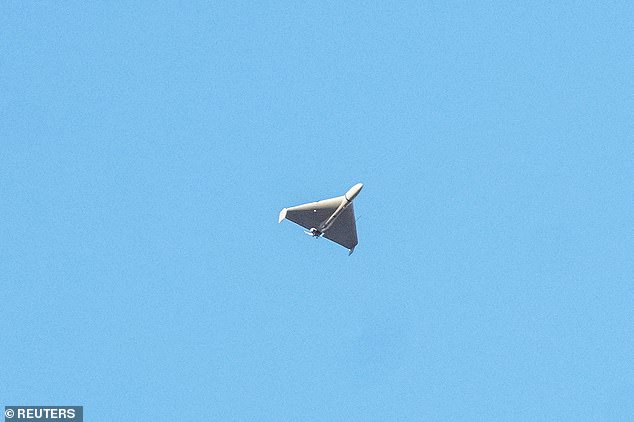 Weapons supplied by Tehran have been used by the Russian military in the Ukraine war, including bloody strikes on non-military targets. 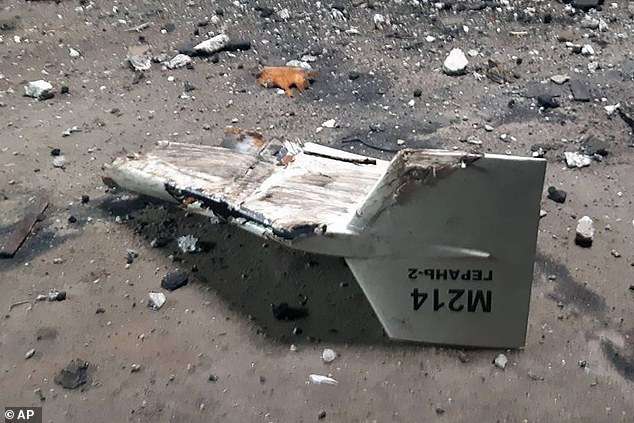 Image of what Ukraine claims is wreckage of an Iranian Shahed drone downed near Kupiansk, Ukraine during the invasion

The Prime Minister, in his first questioning by a super-committee of MPs, on Tuesday, cited Iran’s nuclear programme and its destabilising actions among his concerns.

The Defence Secretary claimed Russia has ‘failed to achieve its strategic objectives’ in Ukraine, as he set out the casualties its army is facing.

Mr Wallace added: ‘Not one single operational commander then in place on February 24 is in charge now. Russia has lost significant numbers of generals and commanding officers.

‘More than 100,000 Russians are dead, injured or have deserted, and Russian capability has been severely hampered by the destruction of more than 4,500 armoured and protected vehicles, as well as more than 140 helicopters and fixed wing aircraft.

Rishi Sunak last night called on Britain’s allies to boost their supply of arms to Ukraine, including the delivery of more air defence systems to the war-torn nation.

The Prime Minister, attending a meeting of the British-led Joint Expeditionary Force in Riga, Latvia, also pushed for a focus on ‘degrading Russia’s capability to regroup and to resupply’.

He demanded that other nations be ‘very strong about calling out’ Iran‘s supply of weaponry for Vladimir Putin‘s war machine and to keep up crippling sanctions on Moscow.

And Mr Sunak dismissed any possible call for a ceasefire by Russia as ‘completely meaningless’ until Mr Putin withdrew his troops from occupied parts of Ukraine.

The PM arrived in the Latvian capital for the JEF meeting – which brought together the leaders of Denmark, Finland, Estonia, Iceland, Latvia, Lithuania, the Netherlands, Sweden, Norway and the UK – on the first leg of a whistlestop trip to the Baltic region.

He later met British troops in neighbouring Estonia and to sign a new technology partnership to bolster digital ties.

Mr Sunak is calling on JEF leaders to sustain or exceed their current levels of support for Ukraine into 2023.

Britain has pledged to supply hundreds of thousands of rounds of artillery ammunition to Ukraine next year, under a £250million contract.

Mr Wallace today said the UK will donate thousands of cold weather kits to Ukrainian soldiers and has sent 900 generators to help the war-torn country prepare for winter.

The Defence Secretary told the Commons: ‘As the mercury drops further in temperature in Ukraine, the UK is doing what we can to help Ukrainians endure the harsh winter.

‘We anticipate 10,000 further cold weather kits will be delivered by Christmas. Across the international community about 1.23 million winter kit items have been deployed to Ukraine.’