A couple put their neighbours ‘under siege’ in a decade-long row over a Dorset country lane – with the husband once donning a balaclava to slash a pool wall to flood their garden.

Retired aircraft engineer Stephen Gee and his wife Jacqueline ran a ‘disgraceful and belligerent’ campaign of terror against Jason and Averil Little from their £900,000 farm in Puxey, near Sturminster Newton, Dorset.

Mr Little, a decorated Army major, and his wife were continually targeted by the Gees, who left the Littles’ daughter terrified one of them would climb through her bedroom window at night.

The bad blood was sparked over the use of the access road between their farmhouse and the Littles’ home, a court heard yesterday. 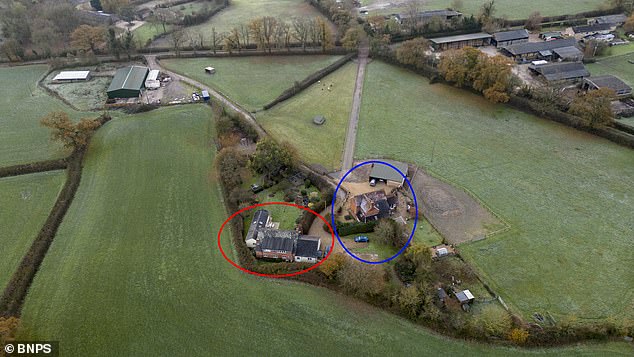 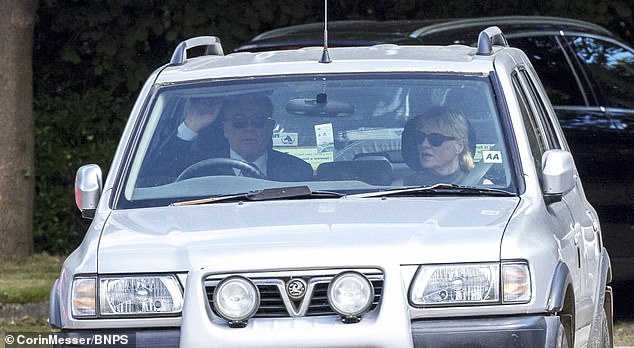 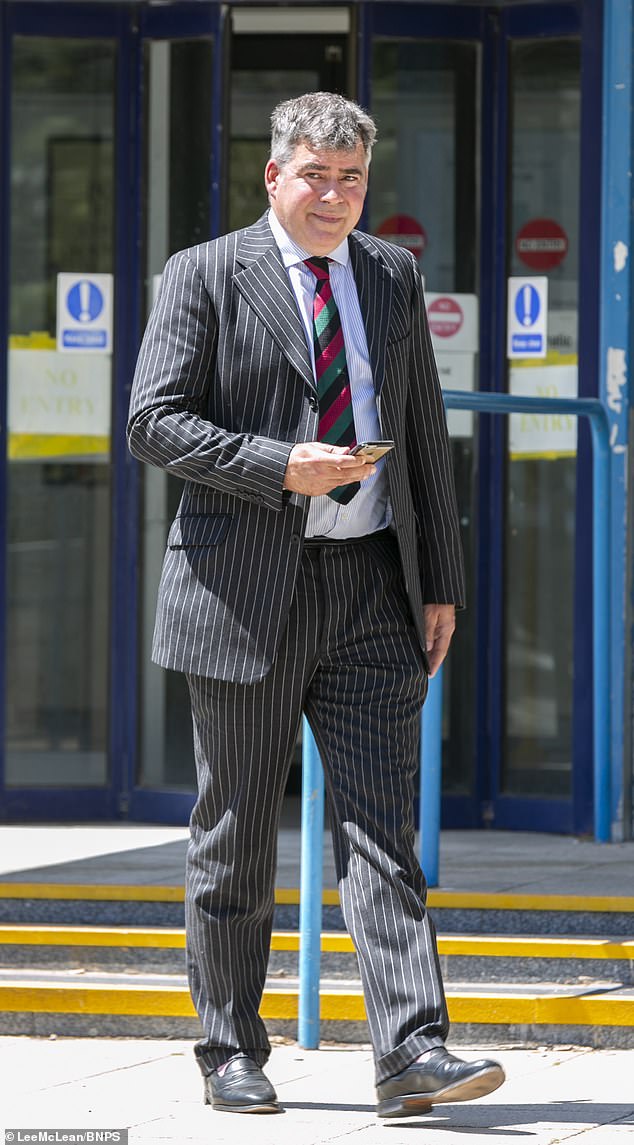 Delivery drivers and visitors would be verbally abused by the Gees, with one courier ordered to ‘get the f*** off my land’.

They blocked off their access with a gate and concrete bricks and even went to the trouble of putting up fake signs to misdirect visitors.

A court heard Mr Gee, 68, had been given a restraining order to keep away from the Littles in 2018 after he was convicted of causing criminal damage to their outdoor swimming pool.

He wore a balaclava and snuck onto their property at night to slash the pool with a knife, flooding their garden. He was caught carrying out the act on CCTV. 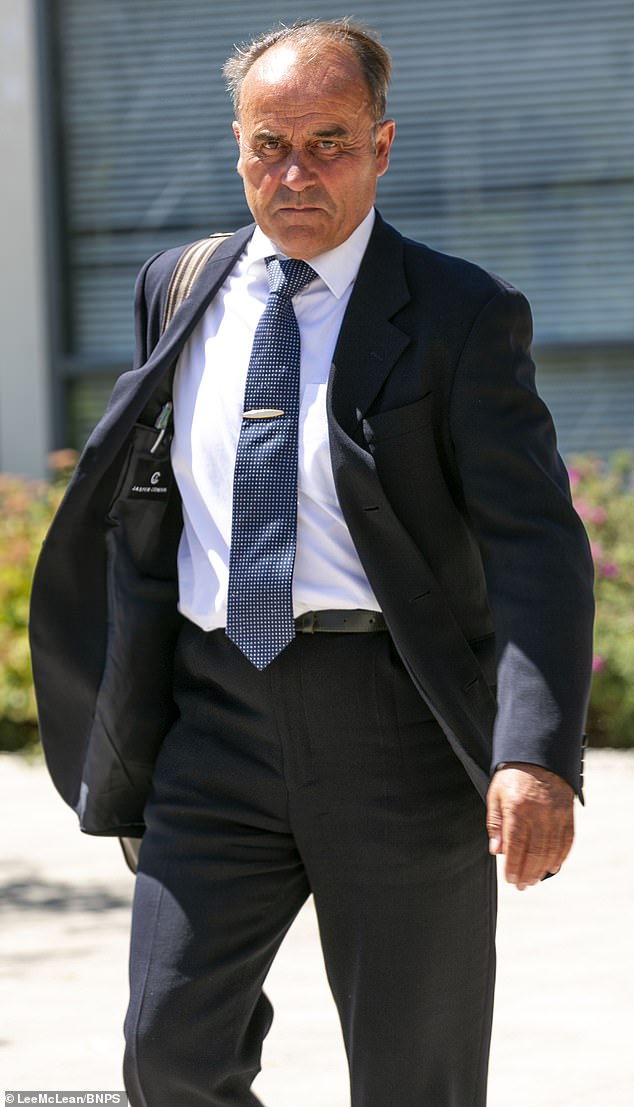 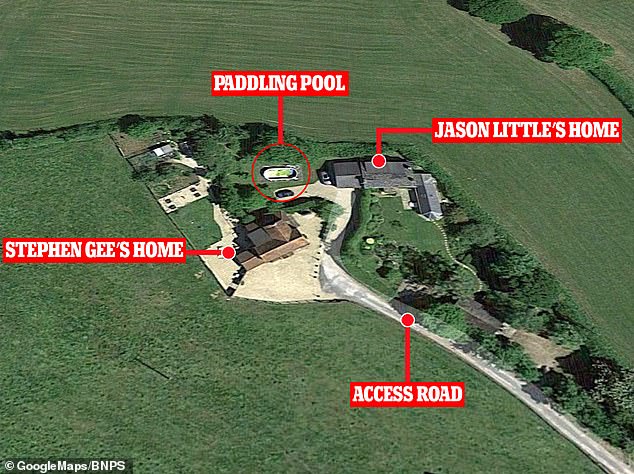 Jason Little’s pool was attacked by Gee, who slashed the side of it to flood their garden lawn in Dorset 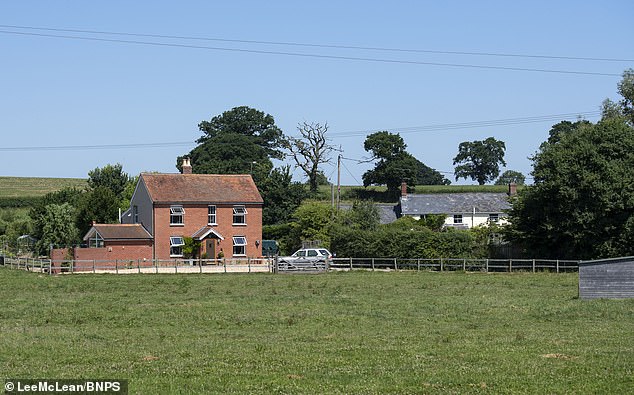 Stephen Gee’s house, left, and Jason Little’s property, right, are at the centre of the row

But rather than keep the peace, the criminal conviction only led Mr Gee’s resentment to deepen, a court heard.

And he ‘put two fingers up’ at the courts by carrying on with his behaviour.

‘There is a track for access to their property which they shared with the defendant. There was a history of unpleasantness between them.

‘In June 2016, Mr Gee went onto [their] property and using something sharp slashed the side of the swimming pool causing water to flood her garden.

‘As a result of that he was subjected to a restraining order.’ 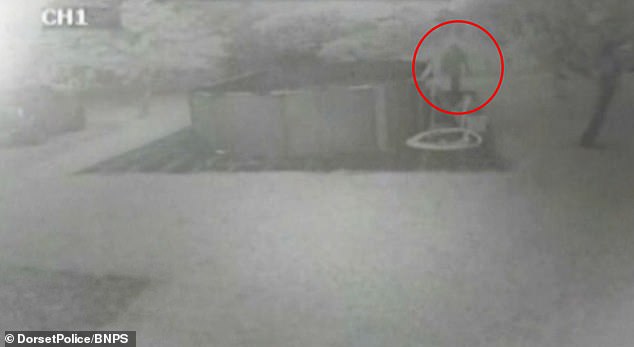 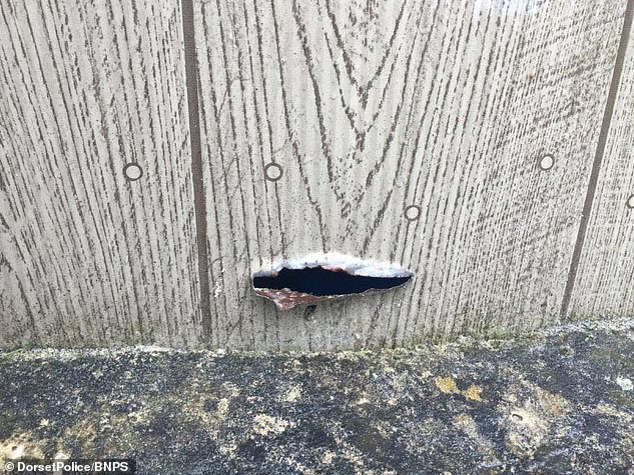 He added: ‘They had been interfering with delivery drivers and misdirecting people away from the Little’s property by putting up signs and impeding their access.

‘A delivery driver was stopped as Mr Gee shut the gates. Mrs Gee also came out and the driver saw them both being angry and aggressive with Mrs Little.

‘In December 2020, concrete blocks had been pulled across the lane and signs erected.

‘A friend was looking after Mrs Little’s cats and chickens in April 2021. As he came down the track he came across a fuel delivery truck and heard Mr Gee shouting, “get the f**k off my land”.

Mr Hall read a statement by Mrs Little in which she said her family felt like they were living in a ‘state of siege’ and that the harassment had impacted her mental health.

The mother-of-two said: ‘Since the beginning they have subjected us to a campaign of harassment.

‘My children are extremely frightened of them and their dogs. My elder daughter fears he will climb into her bedroom window.

‘He was filmed creeping into the garden wearing a balaclava. These sightings of him in the garden has shaped their childhood.

‘I worry constantly for the safety of people visiting our property. They accuse us of trying to kill their animals.

‘Their behaviour is so erratic its like constantly living under a state of siege. We are a hard working, law-abiding family.

‘This distress has caused me to have ongoing treatment for anxiety’.

Mr Little served in the Army and won the Military Cross for displaying inspirational leadership in battle in Afghanistan in 2008.

Mary Aspinall-Miles and Richard Martin, defending the Gees, both argued that their clients had a ‘legitimate concern’ about delivery drivers and visitors on the track that they own.

Mr Martin, representing Mr Gee, said: ‘The Gees own the lane. Anybody that lives in a rural area and has the joys of owning a shared track is of course responsible for the upkeep of it and making good any damage to the surface.

‘There was a legitimate concern for the lane itself or the animals that might have escaped and the general nuisance of delivery drivers going up their lane.’

Mr Martin added that there was just a single incident in which Mr Gee breached his restraining order, and that he had since removed the gate in the lane.

Mrs Aspinall-Miles, defending Mrs Gee, said that the loss of her previous good character was a ‘badge of shame.’

She said: ‘She is not a well woman. She has led a life without blame, dedicated to animal welfare and rescue.’

Judge Richard Pawson said the couple had acted ‘disgracefully’ and told them to grow up.

He subjected them both to an indefinite restraining order. Mr Gee was given a 12-month prison sentence suspended for two years, while Mrs Gee’s ten-week sentence was suspended for a year.

He said: ‘You are both in your 60s. You have behaved disgracefully. I am not persuaded that there is a proper reason for the grievance you nurse.

‘The background put forward does not come close to explaining your belligerent and extremely unpleasant behavior.

‘It is the fact that the two of you, for reasons unknown, have developed an obsession with your law-abiding neighbours.

‘You have turned where you live into a rural hell. You both knew full well the impact of your actions and it is the reason you were so unpleasant.

‘The only thing that is going to resolve the issue is if you are able to look within yourselves and grow up’.

Judge Pawson put it to Mr Gee that the fact he was found guilty for damaging their swimming pool had made him feel ‘even more resentful’, adding: ‘Your resentment should be to yourself.’

He blasted him for his ‘flagrant disregard’ of the restraining order imposed in 2018 and warned Mr Gee: ‘If there is a breach, I will deal with you myself. You came within a whisker of prison today.

‘You lack remorse and continue to deny the facts of your conviction. You have put two fingers up to the court.’