For most of this week, Scott Morrison did not look like a man about to be censured as a disgrace to parliament for secretly swearing himself in to five extra ministries.

The former prime minister sat in his seat in the ‘naughty corner’ of the House of Representatives looking utterly unbothered as his fate was debated.

Mr Morrison even smiled and waved at photographers on Tuesday during Question Time, when both parties argued over censuring him.

He appeared in particularly high spirits that day, animatedly chatting and laughing heartily with his seatmate Alex Hawke and showing him things on his phone.

But this was likely all an act as just 15 minutes earlier Mr Hawke was forced to deny a rift with Mr Morrison after revelations he’d told author Niki Savva the former PM should have quit after losing the election but was ‘addicted to power’.

When the time finally came and Labor pushed the censure motion on Wednesday morning, Mr Morrison didn’t decide to take the political moment any more seriously. 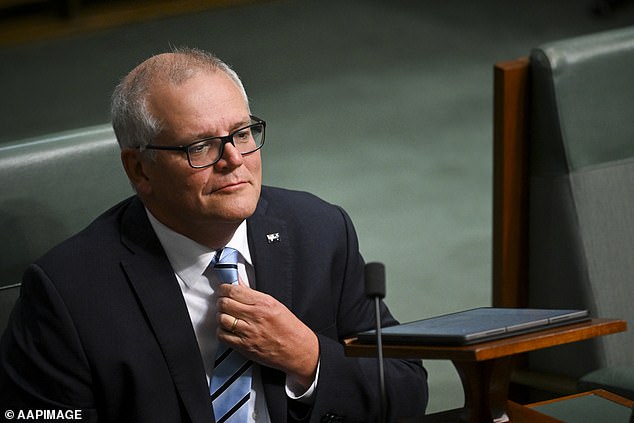 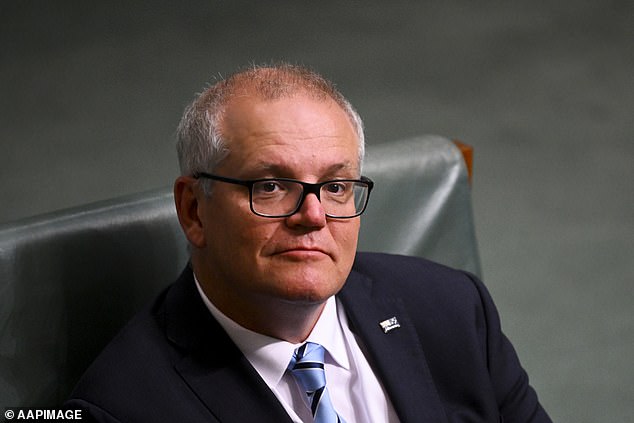 Instead he scrolled through his phone and tablet as Leader of the House Tony Burke brought on the censure motion with a stinging 15-minute speech.

Occasionally he would read something he thought was funny and have a little chuckle to himself or with Mr Hawke.

There was no reaction when Mr Burke said that, not only did he fail to meet the standards of Parliament, he ‘undermined them, rejected them, he attacked them, and he abused them’.

Nothing either when he was admonished for preventing parliament from doing its job, undermining public confidence in government, or ‘deceiving’ his colleagues, and neither as his explanations for his secret ministries were ripped apart as ‘logically impossible’.

Mr Morrison did look up a couple of times as Mr Burke argued he breached the principles of responsible government, and didn’t even tell the ministers whose portfolios he swore himself in to.

Starring straight ahead, he blinked rapidly like a deer in headlights, his smirk vanished, for about 15 seconds – then his attention returned to his phone.

A few other times he glanced at the packed press gallery, as if to gauge the reaction of the far more attentive media. 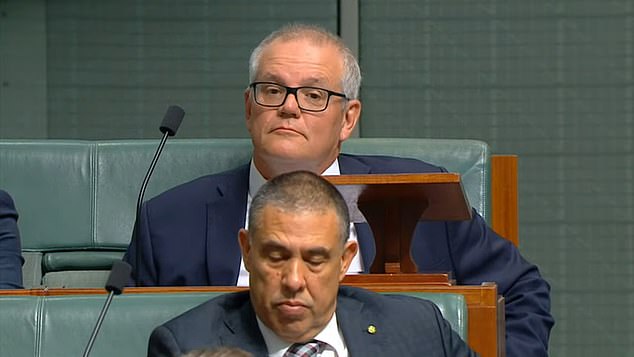 Mr Morrison did look up a couple of times, starring straight ahead, he blinked rapidly like a deer in headlights, his smirk vanished, for about 15 seconds – then returned to his phone

His party was also uncharacteristically quiet, listening – or fiddling with their phones – in silence until Mr Burke admonished those who supported the censure, but went along with opposing it anyway.

‘They’ve got to lock in; they’ve got to follow what their leader wants… that is exactly what happened for the whole of the last term. It is exactly how every precedent was trashed,’ he said.

Mr Morrison’s demeanour only changed when he rose to defend himself after Mr Burke finished his condemnation.

Now fully engaged and fired up he defiantly laid out his case in a 24-minute rebuttal justifying his actions and refusing to substantially apologise.

It was the first time Mr Morrison had spoken to parliament since his May 21 election loss. His raised voice was reminiscent of his daily performances when he was on the other side of the chamber.

His chief defence was that the Covid-19 pandemic and the trade war with China made for a dangerous and uncertain time that required unorthodox measures.

‘I am proud that at a time of extreme trial my government stood up and faced the abyss of uncertainty that our country looked into and the coercion of a regional bully and saw Australia through the storm.’ 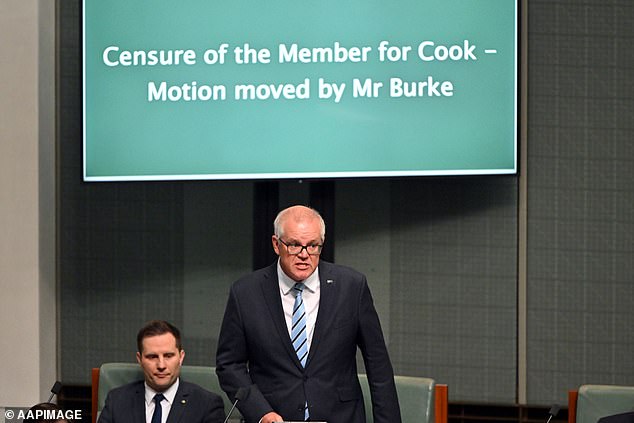 Only he faced such adversity, only he made the tough calls, only he stared down Beijing – and came out the other side with a stronger country. And how dare anyone judge him.

‘For those who wish to add their judgement today on my actions in supporting this censure motion, I simply suggest that they stop and consider the following – have you ever had to deal with a crisis where the outlook was completely unknown?’ he said.

‘In such circumstances, were you able to get all the decisions perfectly right? And where you may have made errors, were you fortunate enough for them to have had no material impact on the result and the result itself proved to be world-leading?

‘Once you have considered your own experience, or what happens when you have had more in government, then you may wish to cast the first stone in this place.’

Mr Morrison multiple times accused the government of using the censure to exact ‘political retribution’ on him – which he had no intention of ‘submitting’ to.

‘I will take the instruction of my faith and turn the other cheek,’ he countered, noting his silence since the election as if it was a virtue. 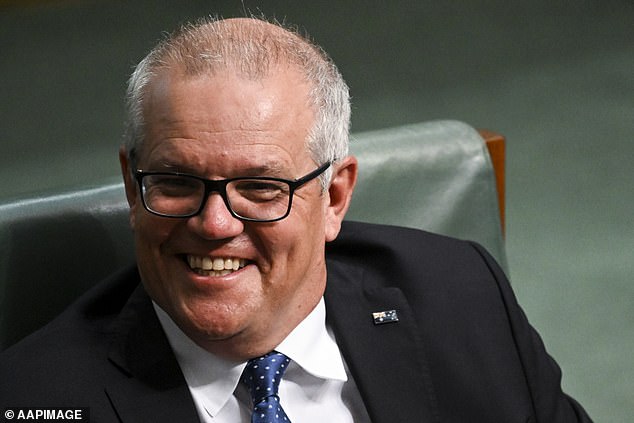 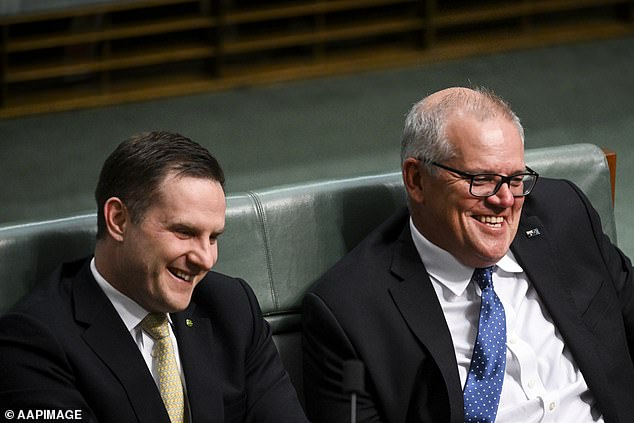 He appeared in particularly high spirits on Tuesday, animatedly chatting and laughing heartily with his seatmate Alex Hawke and showing him things on his phone 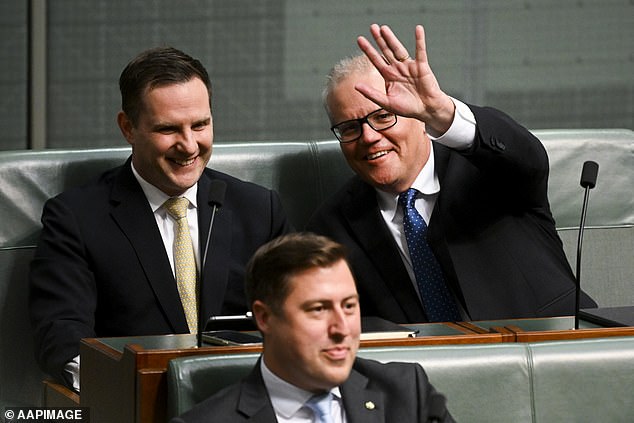 Mr Morrison even smiled and waved at photographers on Tuesday during Question Time, when both parties argued over censuring him

Instead of ‘retribution’, he suggested the government ‘appreciate in humility’ and ‘gracefully’ learn from how he led the country.

Despite there being no link between his handling of the pandemic and him becoming ‘minister for everything’, he insisted it meant at least some of his actions were necessary.

‘I do not resile from these decisions and believe them entirely necessary,’ he said of appointing himself to oversee finance and health.

Mr Morrison only admitted that secretly himself swearing in to the home affairs and treasury portfolios was ‘unnecessary’ in hindsight.

At the same time, he sought to play down the appointments as ‘dormant redundancy only to be activated in extraordinary circumstances’.

Apparently one of these circumstances was overriding Resources Minister Keith Pitt to cancel the PEP11 offshore gas and oil exploration licence off the NSW Central Coast three months before the election.

‘I do not resile from that action,’ he said in his speech, arguing it was done lawfully and was the only time he exercised any of the powers he took for himself.

As close to an apology as Mr Morrison got was the classic ‘sorry to anyone who was upset’ – but nothing for actually doing it. 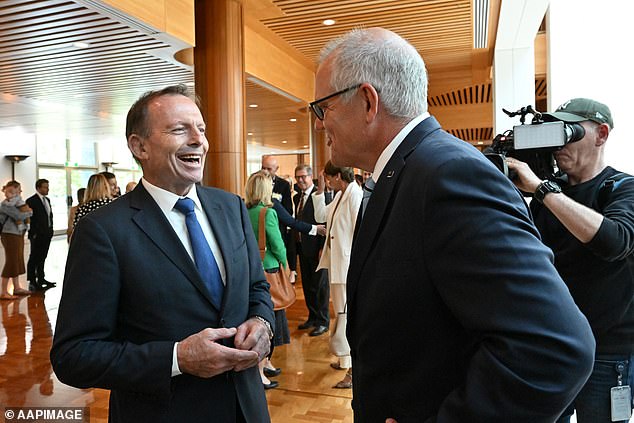 ‘I acknowledge that the nondisclosure of arrangements has caused unintentional offence and extend an apology to those who were offended,’ he said.

‘But I do not apologise for taking action, especially prudent redundancy action, in a national crisis in order to save lives and to save livelihoods.’

In what could be Mr Morrison’s final speech to parliament, he declared himself to be happy and proud of his achievements.

‘I have seen bitterness destroy people who have come to this place, and it continues to gnaw away at them each and every day of their lives for even decades after they leave this place,’ he said.

Another way of saying he regrets nothing. 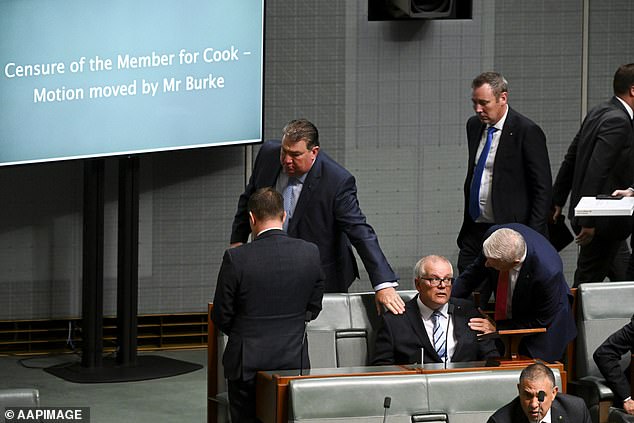 One by one they filed past Mr Morrison, shaking his hand, patting him on the shoulder as they left the chamber en masse after he finished his fiery defence 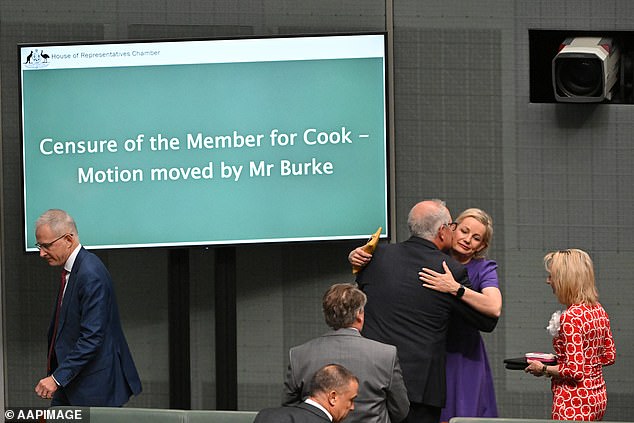 Dozens of Coalition members bolted from the chamber after his speech was completed, ignoring Attorney-General Mark Dreyfus’ follow up.

One by one they filed past Mr Morrison, shaking his hand, patting him on the shoulder, or giving him a hug, as they left.

Then the ex-PM himself slinked away. Paul Fletcher, Michael McCormack, Angie Bell, Keith Wollahan, Jenny Ware, Aaron Violi, and Bridget Archer were all who remained.

Another two hours of speeches for and against censure followed, along expected lines – damning condemnation from Labor and most of the crossbench, and outrage and excuses from the Coalition.

Those who couldn’t hold their nose and give their former leader support simply argued the motion was unnecessary, partisan, and wasted time better spent on pressing matters like the cost of living.

As the speeches went on, MPs came and went from the chamber and held sidebar discussions – even with political opponents.

Nationals MP Michael McCormack chatted to Mr Dreyfus, whom he blasted as an out of touch inner-city snob weeks earlier, and his Labor colleague Madeleine King. 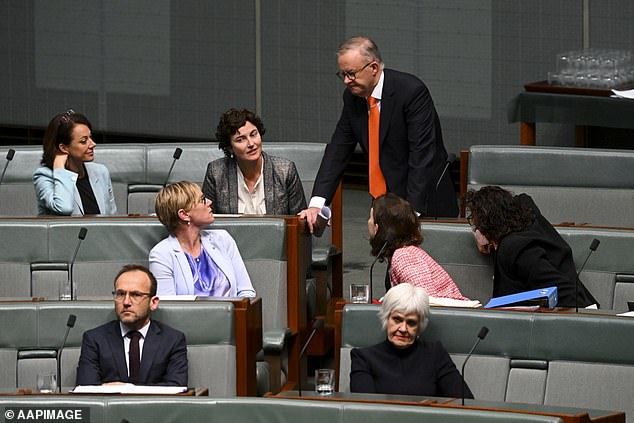 Then an attendant brought Ms Archer, who had indicated she would vote in favour of censure, a glass of water and a stand for her notes. She was going to speak.

The increasingly maverick Liberal party member blasted Mr Morrison’s actions as ‘disrespectful’ and an affront to Australia’s system of government.

‘I’ve relentlessly advocated for more integrity in politics and fought for an integrity commission that would begin to restore the public’s faith in elected officials,’ she argued.

‘To sit quietly now would be hypocritical, and I firmly believe we should be intentional in the actions we take to ensure that we do not let this happen again.’

All this time, Mr Morrison did not seem particularly bothered by his imminent censuring.

After leaving the chamber he shared a laugh with former prime minister Tony Abbott at the unveiling of his portrait.

Finally by almost midday, everyone had had enough and it was time for the bells to be rung for a vote.

MPs filed in over the next four minutes and were joined by numerous senators who sat on the side to observe the historic moment.

Among them was Senator Jana Stewart who came carrying her baby – until Senator Penny Wong delighted in holding and playing with the infant as MPs took their seats.

Ms Archer got out of her seat and walked across the aisle to a chair at the back where along with most of the crossbench she sat to vote with Labor.

When she returned to her seat after the vote, none of her colleagues so much as looked up to acknowledge her presence. 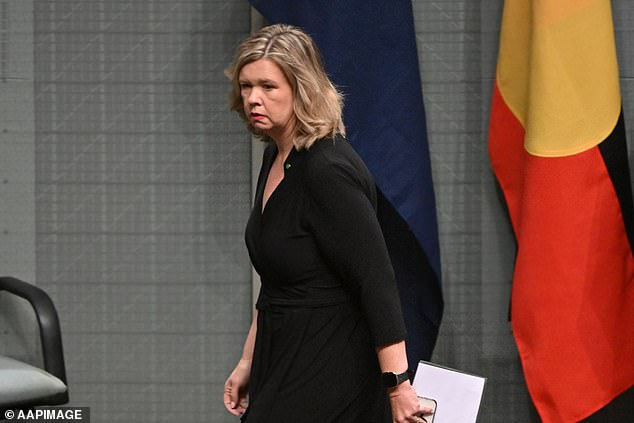 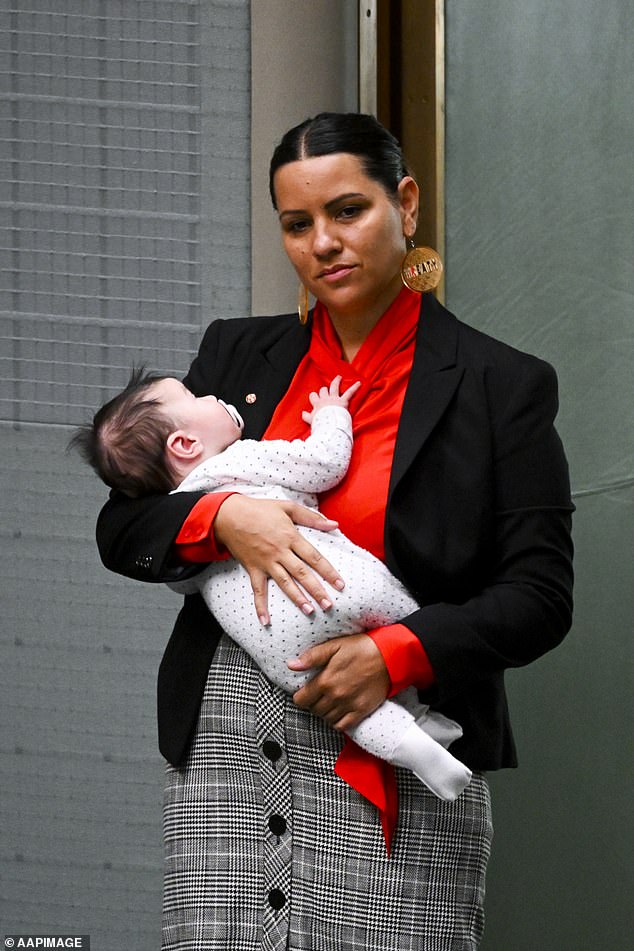 MPs filed in over the next four minutes and were joined by numerous senators who sat on the side to observe the historic moment. Among them was Senator Jana Stewart who came carrying her baby 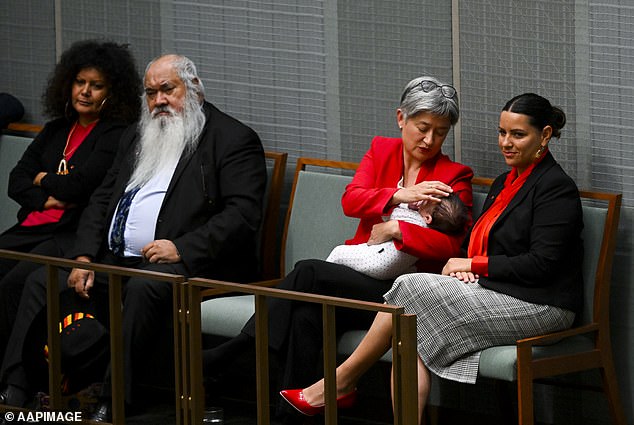 The final vote was 86 to 50, with 15 either not present or abstaining.

Deputy Liberal leader Sussan Ley was among the missing, but was given a pair so the vote would not be lopsided.

Others like former home affairs minister Karen Andrews and independent Dai Le deliberately abstained, but later told media they still thought the censure was a waste of time.

Mr Morrison, as he had throughout the week, showed no emotion as the count was read out, knowing it was a foregone conclusion from when it was first proposed.

Then, in contrast to how momentously it began, the House moved on with absolutely no fanfare to its next item – like Mr Morrison was just another item on the agenda.

So profoundly damaged is his political career by the saga, and his response to it, that he will never hold a meaningful position, and may never be heard in parliament again. 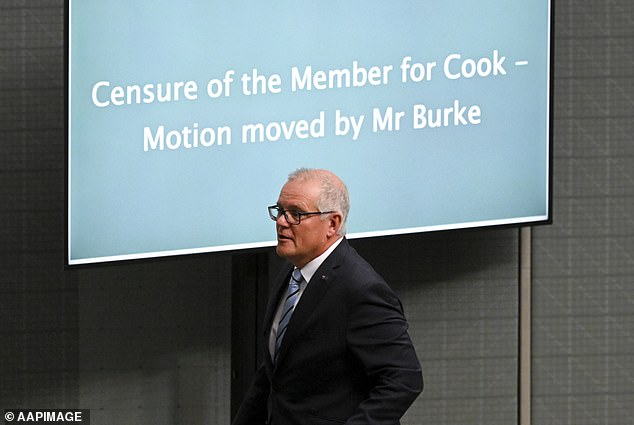 Exit stage left? Mr Morrison is so damaged by the saga that many think he will resign over Chrsitmas

As he thanked former treasurer Josh Frydenberg, former health minister Greg Hunt – both of whose portfolios he appointed himself to – and Mr McCormack, along with his family, staff, and supporters, he seemed like a man at the end.

‘I conclude by thanking the Australian people for the privilege of being able to serve my country in so many roles, but especially as prime minister,’ he said.

‘I gave it everything I had. I did it to the best of my ability and in the best of faith each and every day I had the privilege to serve the Australian people.’

Many, including Environment Minister Tanya Plibersek, think Mr Morrison will finally do what he should have done on May 22 and resign.

‘Scott Morrison says sorry not sorry. My prediction – he pulls the pin over Christmas. This is his last week,’ she wrote on Twitter.

But don’t put it past the man once pilloried as ‘Squat Morrison’ to cling on for as long as possible.