China’s ambassador to Britain is being hauled into the Foreign Office today after a BBC journalist was beaten by police while covering protests in Shanghai.

Zheng Zeguang has been summoned over the treatment of Ed Lawrence as he reported on local demonstrations against China’s zero-Covid strategy.

According to the BBC, the camera operator was beaten and kicked by police while being arrested when covering the protests in China’s biggest city.

Foreign Office minister David Rutley told MPs this afternoon: ‘We are calling in the Chinese ambassador to make clear the unacceptable and unwarranted nature of these actions, the importance of freedom of speech and to demand a full and thorough explanation.

‘We have also been in close touch with the journalist and the BBC throughout to gather the facts and provide consular support.

‘We recognise the Covid-related restrictions in China are challenging for the Chinese people and we urge the Chinese authorities to respect the rights of those who decide to express their views about the situation.’

Mr Rutley also described China as a ‘systemic challenge’ to Britain’s ‘values and interests’  as he highlighted an ongoing investigation into recent clashes outside the Chinese Consulate in Manchester.

A Government source confirmed China’s ambassador had been summoned by the Foreign Office yesterday and would be coming in today. 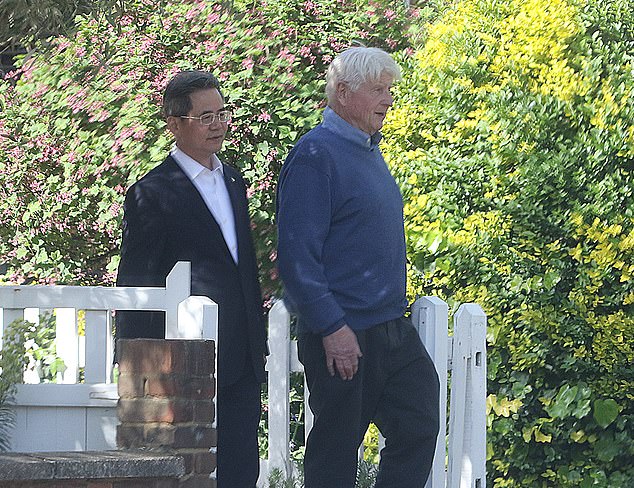 China’s ambassador to Britain Zheng Zeguang, pictured earlier this year with Stanley Johnson, is being hauled into the Foreign Office today 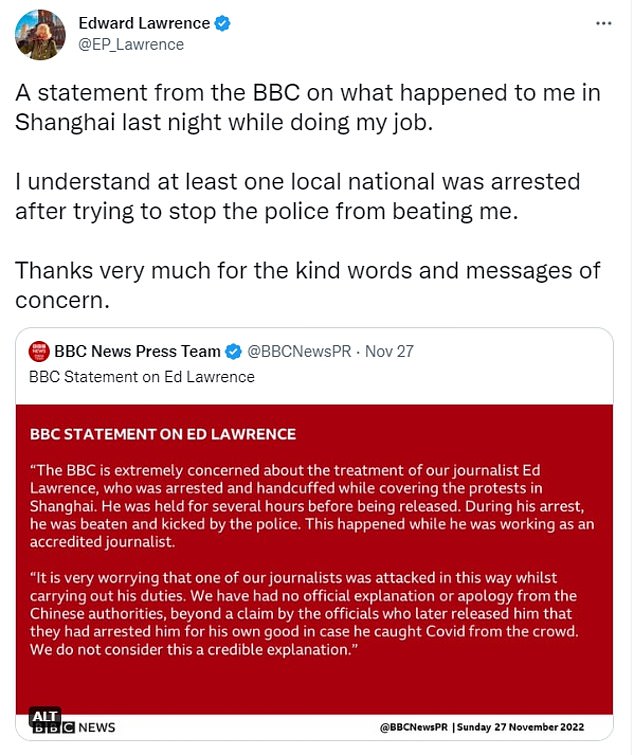 According to the BBC, camera operator Ed Lawrence was beaten and kicked by police while being arrested when covering the protests in China’s biggest city

Foreign Secretary James Cleverly has described the case as ‘deeply disturbing’ while No10 said Mr Lawrence’s arrest was ‘shocking and unacceptable’.

‘Journalists must be able to do their jobs without fear of intimidation,’ the Prime Minister’s official spokesman told reporters yesterday.

The row comes as Rishi Sunak was warned he risks ‘appeasing’ China, despite the PM toughening his language towards Beijing.

In a key speech last night, Mr Sunak declared the ‘golden era’ of ties between Britain and China as ‘over’.

His address was a swipe at former chancellor George Osborne, who once called for a ‘golden decade’ in the UK-China relationship.

But, speaking at the annual Lord Mayor’s Banquet in London’s Guildhall, Mr Sunak also urged the UK to pursue ‘robust pragmatism’ in dealing with Beijing.

Former Tory leader Sir Iain Duncan Smith, a leading critic of China, lashed out at Mr Sunak’s stance and dismissed the PM’s call for ‘robust pragmatism’ as a ‘contradiction in terms’.

He accused the PM of backtracking on his tough language during this summer’s Tory leadership contest, when Mr Sunak branded Beijing as the ‘biggest-long term threat to Britain’.

Sir Iain also drew a comparison with Britain’s appeasement of Nazi Germany in the 1930s. 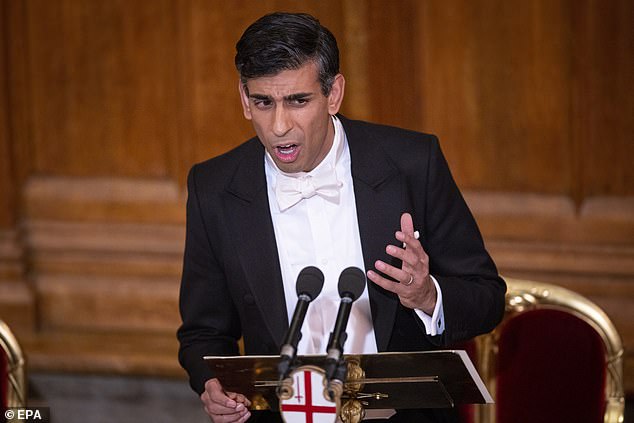 Speaking at the annual Lord Mayor’s Banquet in London’s Guildhall, Rishi Sunak urged the UK to pursue ‘robust pragmatism’ in dealing with Beijing 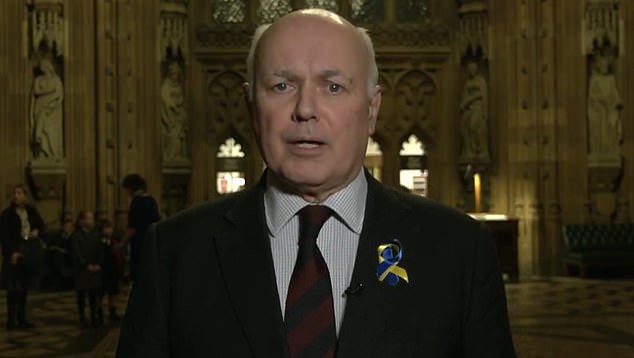 Sir Iain Duncan Smith, a leading critic of China, lashed out at Mr Sunak’s stance and dismissed the PM’s call for ‘robust pragmatism’ as a ‘contradiction in terms’.

Asked about Mr Sunak’s use of the phrase ‘robust pragmatism’, the former cabinet minister told Channel 4 News: ‘I don’t think it means anything.

‘It’s like a contradiction in terms. I don’t know quite what we’re supposed to take from that.

‘If, on the one hand, you want to be robust with China, then why would they bother if at the same time you’re trying to, as it were, do business with them?

‘They just see that as weakness.’

He listed China’s treatment of Uighurs in Xinjiang, the use of slave labour, crackdowns in Tibet and Hong Kong, and the oppression of protesters as evidence of a ‘dictatorial, brutal government’.

He added: ‘I don’t know what more you need as evidence that they now become a threat.’

Sir Iain also pointed to the treatment of Mr Lawrence as he covered protests in Shanghai.

‘On the very day we see all of that, the Government comes out with its “robust pragmatism”, which I think to most people out there means kind of anything you want it to mean, and that sounds to me like getting pretty close to appeasement,’ he said.

‘For too long the free world has turned a blind eye to the abuses and the threats from China.’

Sir Iain, who is among a number of MPs to have been sanctioned by China over their criticism of Beijing, added: ‘Unless we are clear and robust, China will treat us as weak.

‘And if they do that, they will do it because they think, therefore, we will end up appeasing them.

‘I just feel the road to appeasement we went through in the 1930s.

‘If we learn any lesson at all, it’s the more you appease dictatorships that impose authority on their people and strip away human rights, the more you drift into dangerous waters.’