Rishi Sunak and South African president Cyril Ramaphosa vowed to deepen links between the two countries as they met in Downing Street today.

The PM hosted Mr Ramaphosa for talks and lunch at No10 during his state visit to Britain.

Speaking ahead of the meetings both spoke about increasing trade between the nations.

The South African president told reporters he was in the UK to ‘promote trade and investment’ – after it emerged he will urge the PM to treble the number of his citizens coming to study in the UK.

Cyril Ramaphosa is to push the PM for more access to the British education system on the second day of his state visit.

Yesterday Mr Ramaphosa became the first South African president to address MPs and Peers at Westminster since Nelson Mandela in 1996.

He said he would make the case to Mr Sunak for a dramatic rise in South African PHD students in the UK during their talks. 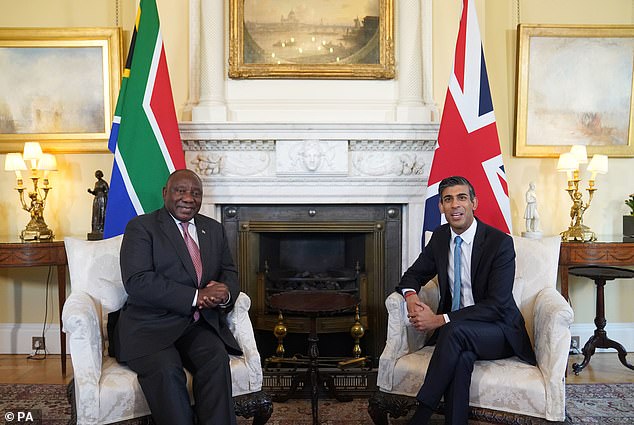 The PM hosted Mr Ramaphosa for talks and lunch at No10 during his state visit to Britain. 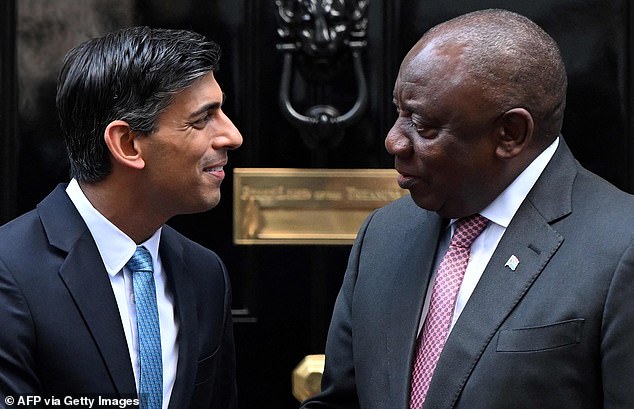 Speaking ahead of the meetings both spoke about increasing trade between the nations. 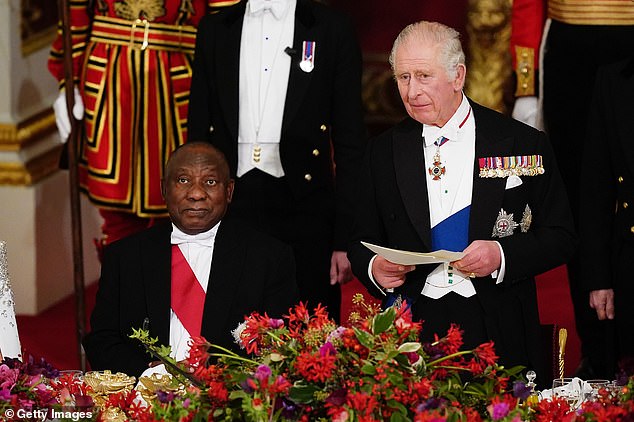 Mr Sunak said he wants to ‘turbocharge infrastructure investment and economic growth together’ with South Africa ahead of meeting the president.

They have launched an infrastructure partnership to support South Africa’s economic growth through major infrastructure developments and offering increased access to UK companies to projects worth up to £5.37billion over the next three years.

Mr Sunak said: ‘South Africa is already the UK’s biggest trading partner on the continent, and we have ambitious plans to turbocharge infrastructure investment and economic growth together.’

Buckingham Palace hosted a lavish banquet in honour of the president last night, with guests dining on grilled brill – a delicate flat fish – followed by pheasant from the Windsor estate and, for dessert, iced vanilla parfait with caramelised apples.

Work and Pensions Secretary Mel Stride denied the event was too extravagant amid the cost of living crisis, saying said the visit will help boost the economy.

Mr Stride told LBC: ‘Right at the heart, actually, of our soft power, as it’s often called, is this ability to project our sense of history and pageant.’

Asked about the timing, with people struggling with the cost of living, Mr Stride said: ‘I would see it in terms of engaging with our most important trading partner on the continent of Africa, with whom we have very important ties of history and trade and economics.

‘What really we want to come out of this is a stronger and healthier UK economy – and that benefits everybody.

‘I think, whether it’s pheasant on the plate or pie and mash, I think if that can be achieved, then that’s the biggest prize.’

In his speech to Parliament yesterday, Mr Ramaphosa argued for greater trade and investment opportunities including to help his nation deal with power blackouts.

He said more than 800 South Africans have benefited from the Chevening scholarship programme, and there are over 130 South African PhD candidates studying in the UK.

‘I would like to see these numbers being increased threefold. And when I meet the Prime Minister tomorrow that’s particularly the message I’m going to pass on to him,’ the president said.

‘I hope he’s here and he’s listening ahead of my discussions with him tomorrow.’

Mr Sunak, who attended a guard of honour for the president and joined the Buckingham Palace banquet last night, was not in the audience.

Mr Ramaphosa spoke of ‘new and exciting ways’ for British businesses to build closer ties as he rebuilds South Africa from the coronavirus pandemic and years of ‘grand corruption’.

‘There are few countries that have the depth of experience and knowledge of the South African economy than Britain. British companies need to use this advantage to greater effect to seek out opportunities in our country for investment and trade,’ he said. 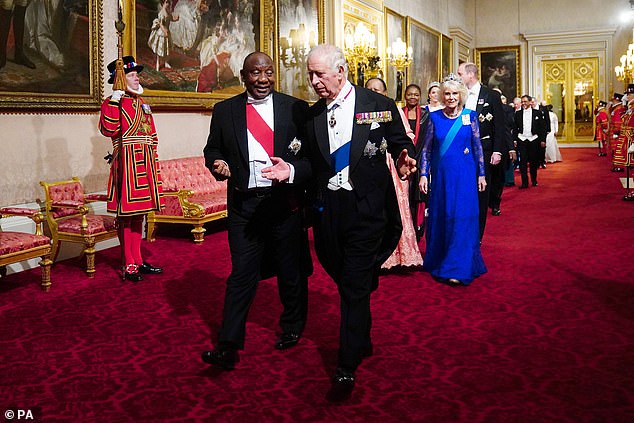 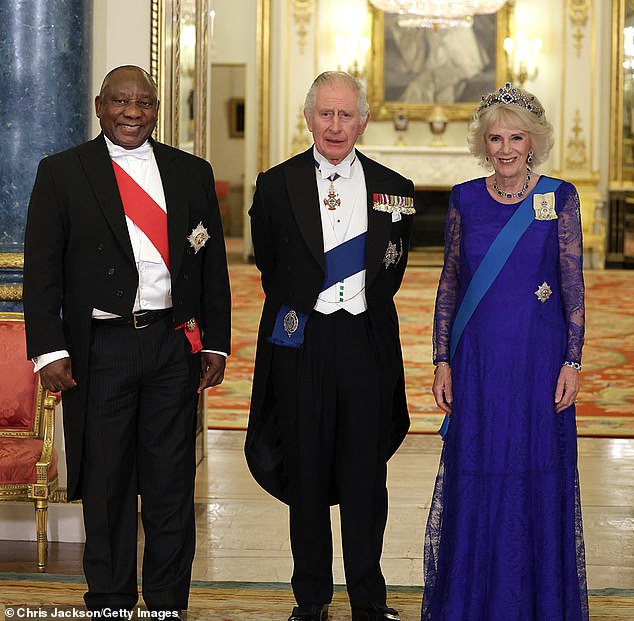 The president said economic reforms including a major restructuring of the energy market to ‘address severe power shortages’ make for ‘great opportunities for foreign investment, for innovation and partnership’.

Mr Ramaphosa said the UK-South Africa relationship has ‘had its ups and downs’, with his nation having won independence from the British Empire.

‘But I want to capitalise on its ups because it’s through capitalising on the positive sides of our relationship that we’re able to have a mutually beneficial future,’ he said.

He urged the UK to ‘raise its voice in favour of more representative and more inclusive international bodies’, including the UN security council and global financial institutions.

And he called for industrialised nations to pay significant compensation to developing nations to help them tackle the climate crisis.

‘This should not be seen as charity. It is compensation for the harm done – and the harm yet to be done – to people in developing economies as a consequence of the industrialisation that wealthy countries have had over many years,’ he said.