The Georgia Supreme Court on Wednesday reinstated the state’s ban on abortions after roughly six weeks of pregnancy.

In a one-page order, the high court put a lower court ruling overturning the ban on hold while it considers an appeal. Abortion providers who had resumed performing the procedure past six weeks after the lower court ruling will again have to stop.

Amy Kennedy, vice president for external affairs of Planned Parenthood Southeast, said: ‘It is unconscionable that the Georgia Supreme Court has chosen to deny pregnant people the ability to decide what is best for their own lives and futures.’

The order said seven of the nine justices had agreed to the decision. It said one was disqualified and another did not participate.

Fulton County Superior Court Judge Robert McBurney ruled on November 15 that the state’s abortion ban was invalid because when it was signed into law in 2019, U.S. Supreme Court precedent under Roe. v. Wade and another ruling allowed abortion well past six weeks. 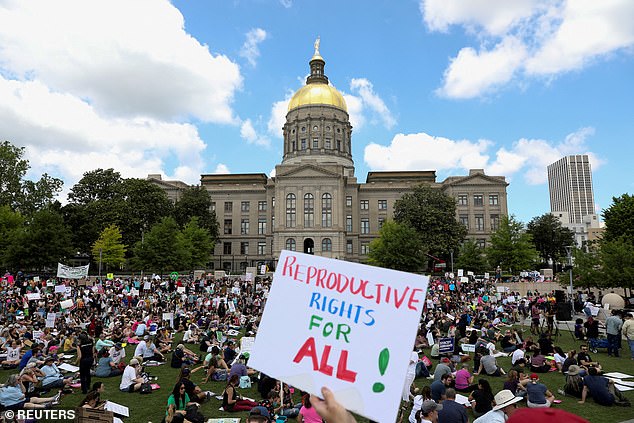 Protesters gathered in Atlanta, Georgia, earlier this year as it became clear the Supreme Court was on a course to overturn Roe v Wade and strip abortion rights from women

The decision immediately prohibited enforcement of the abortion ban statewide. Abortion providers had resumed performing the procedure past six weeks, though some said they were proceeding cautiously over concerns the ban could be quickly reinstated.

The state attorney general’s office appealed the ruling to the state Supreme Court. It also asked the high court for an order putting the decision on hold while the appeal was pending.

It meant a 2019 law banning abortion after a fetal heartbeat is detected, usually around six weeks, could go into effect.

Cardiac activity can be detected by ultrasound in cells within an embryo that will eventually become the heart around six weeks into a pregnancy. That means most abortions in Georgia were effectively banned at a point before many people knew they were pregnant. 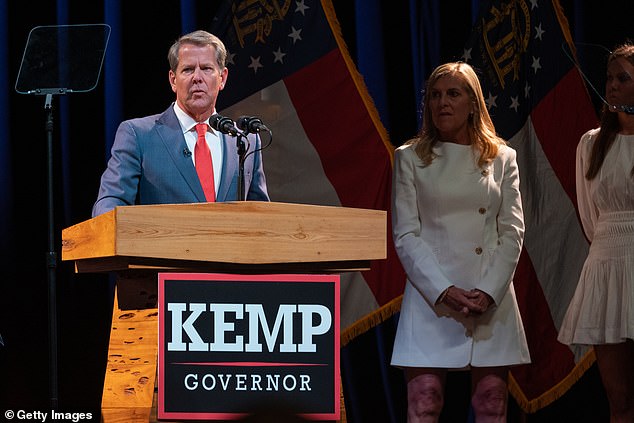 The abortion ban passed the state legislature and was signed into law under Gov Brian Kemp in 2019. He is pictured here addressing his supporters on election night

The law made exceptions in the case of rape and incest, as long as the woman files a police report first. It also allowed for abortions after cardiac activity is detected when the life of the woman is at risk or when a fetus is determined not to be viable because of a serious medical condition.

But almost immediately after it was passed, the state law sparked backlash, with several entertainment giants including Disney, Netflix and Warner Studios threatening to cut ties with the state if the measure ever went into effect.

Actress Alyssa Milano even called for women to boycott sex until the law was repealed. 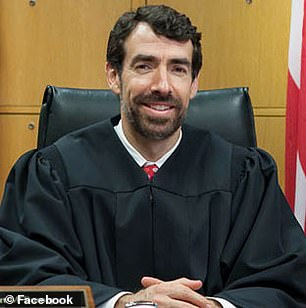 The law had been blocked from taking effect until this summer, when the Supreme Court overturned Roe v Wade’s decades-old protections, allowing restrictions on the procedure in states with trigger laws to be enacted across the country.

When it went into effect, abortion rights activists launched a fresh effort to take it off the books.

In a two-day trial last month they argued that when the law passed the state legislature in 2019, Roe v Wade — the landmark 1973 Supreme Court decision that legalized abortion throughout the United States — had not yet been overturned.

State law, they argued, prevented the legislature from enacting any statutes that violate federal law.

‘Even if the court were to find that the state did have a compelling interest in protecting an embryo beginning just two weeks after a patient’s last menstrual period, the grossly inadequate exceptions make clear that this sweeping ban is far from the least restrictive means [of doing so],’ Julia Kaye, staff attorney with the ACLU Reproductive Freedom Project, argued.

She also argued that the abortion ban violates Georgia’s Constitution’s right to privacy and liberty by forcing pregnancy and childbirth on women.

But state lawyers argued there is no right to privacy for people seeking abortions, and even if the court were to find such a right exists, it’s outweighed because ‘abortion always harms a third party,’ namely the embryo or fetus.

‘We want to protect that third party and, to us, that’s really just the end of the case.’

McBurney ultimately agreed with the abortion activists, writing in his decision Tuesday that when the law was enacted under Gov. Brian Kemp, ‘everywhere in America, including Georgia, it was unequivocally unconstitutional for governments federal, state or local —to ban abortions before viability.’

He said his ‘means that courts — not legislatures — define the law.

‘If the courts have spoken, clearly and directly, as to what the law is, and to what is and is not constitutional, legislatures and legislators are not at liberty to pass laws contrary to such pronouncements.’